We want to do our best to keep clients, staff, and our community healthy and  limit direct contact and practice safe distancing; we need your help to make this possible. It is now mandatory to wear a mask for pickup and drop off (it is also currently required by law) and reschedule if you or anyone in your family has been sick with Covid 19 or had Covid 19 symptoms in the last 14 days. We are following all Covid requirements for sanitizing between pets & clients.

At the time of drop off- park, wait in your car, and text your groomer, they will let you know when it is safe to walk your pet up (still plan enough time to be at our door for drop off and pick up at your scheduled appointment time). We may run a minute or two ahead or behind so we can stagger each groomers clients and prevent overlapping at the door.  Walk your pet into the courtyard as usual and clip your dog’s leash to the carabiner anchored securely by the front door or set your pets carrier next to it (we will have it freshly sanitized for you). You can then step away 6 ft (near our sign and in sight). At that time your groomer will open the door and bring your dog inside, and go straight to the bathtub.  You will need to be sure your dog’s harness or collar is very securely attached before you arrive and if you feel your dog might be able to get away with this method please let us know.  Let your groomer know in advance via email, any pertinent grooming instructions it is difficult to hear with the glass between us. Your groomer will be waiting for you with your pet inside at the designated pick up time. Please arrive on time (give yourself plenty of time to find parking) and text upon arrival from your car, your groomer will reply as soon as we have sanitized and it is safe to walk up.  Again, wait 6ft away near our sign and your groomer will bring your pet out and attach their leash to the carabiner (they will be excited to see you, but please wait till we are back inside to go to your pet).  DO NOT arrive early and hang out in the courtyard or knock on the door for us (we can only communicate over the phone or via email during this time). If there is another client in the courtyard waiting please wait near the street or in your car preferably and give space before coming back for pick up or drop off.

We understand this is a big change from our regular procedure and a lot of details, so please let us know if you have any questions we will do our best to make this a smooth and easy process. And thank you for your patience during these strange times.

Problems behaviors? No need to de-claw.

Try nail tips instead. Their are a few brands on the market but in my experience the Soft Paws brand works the best. A small rubber tip is gently attached to your pets nail with a non toxic adhesive. They typically last 4-6 weeks per application. They are commonly used for cats and also available for dogs.

Your cat can still scratch with Soft Paws allowing normal stretching and scratching behavior to continue without damaging your home or furniture, or causing discomfort for family members.

Disclaimer- I do not promote the use of these as an accessory, however I do feel they are humane alternative to de-clawing when all other options have been exhausted.   Professional application is important to insure your pets safety.

I schedule Monday thru Friday, Cage Free, one on one grooming sessions. I dedicate the entire appointment to working with your pet (not juggling phones, scheduling, or watching other dogs). Your pet gets my full attention for the entire appointment. I only offer one on one grooming sessions, which allows me to offer “cage free” services. After making an appointment, on time drop off and pick up is required (not early or late just on time).  If you are late dropping off, please call to prevent an unnecessary trip here. More than likely we will have to reschedule the appointment to prevent running into the next client’s appointments throughout the day. This will include a $35+ missed appointment fee per pet on your next visit should you decide to reschedule.  Repeat tardies will be addressed and may not be accommodated in future. I understand this kind of scheduling does not work for everyone.  If you need to leave your pet longer that the allotted appointment time, there are many groomers in the area that will gladly keep your pet longer if that better suits your needs. Out of respect for each clients time, I ask that you make arrangements for your pet to be dropped off at their appointment time and picked up promptly at the scheduled pick up time. Thank you for your understanding and cooperation so I can continue to offer this personalized service for your pets.

Appointments are going fast for December, and January, book now to reserve an appointment for your pet. 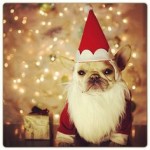 Foxtails can become a health hazard for dogs and other domestic animals, and a nuisance for people. In dogs and other domestic animals the foxtails can become irreversibly lodged. Foxtails can also enter the nostrils and ear canals of many mammals. In all these cases, the foxtail can physically enter the body and muscular movements or, in the case of nostrils, air flow, can cause the foxtails to continue to burrow through soft tissues and organs, causing infection and physical disruption, which in some cases can result in death. In humans, foxtails can go through clothing, particularly fabric shoes and socks, causing discomfort to people while walking.

Foxtails are a problem beginning when the grass inflorescences begin to disarticulate, and ending when the spikelets or spikelet clusters are mechanically abraded or incorporated into the soil, turf, or leaf litter. In some habitats, this can be a matter of weeks, but in others it may require months, especially if different species flower and fruit at different times during the season.

Foxtails that have progressed no further than surface lesions may be removed and the lesion treated with antiseptic and bandaged if necessary. Once a foxtail has passed beneath the skin, dogs are often treated with systemic antibiotics, and the foxtail either allowed to encyst and degrade, or in the case of actual or imminent organ damage, removed surgically. However, surgical removal can be problematic, since foxtails cannot easily be imaged by x-ray or ultrasound. Foxtails imbedded in the nostrils can migrate into the nasal turbinates, causing intense distress, and in rare cases into the brain. Foxtails in the ear canal can puncture the eardrum and enter the middle ear, causing hearing loss.

Combing of fur removes foxtails along with burrs and other detritus, but potentially the most dangerous foxtails are found in areas easily missed: the axillae, between the toes, and in nostrils and ear canals. Occasionally they can even lodge in the conjunctiva under the eyelid.

Many wild barley species are weeds in disturbed habitats, and their growth is encouraged by foot traffic of humans and domestic animals. Control methods consist of restricting traffic to established paths, and eradication of wild barley by mechanical removal or herbicide. Some other foxtail-producing grasses, especially needlegrasses, are dominant species in stable grassland habitats. Control attempts in these cases can actually be counterproductive, creating disturbed habitats where wild barleys may thrive. 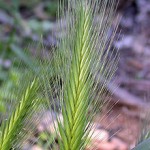 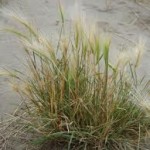